A short film made in Nerja was awarded in Monaco

The staff of El Capistrano Playa was supporting in a remarkable way a short film production that took place in Nerja a couple of years ago. The film, El Mirador was produced and directed by our resident, a Finnish film maker Antti Rautava, who has been visiting El Capistrano Playa since 1991.

Antti was encouraged to make a film for the local festival Cortos de Vista. He took the challenge, wrote and produced a story about a romatic encounter of a guard and a paintress in Nerja by El Mirador, and the film was presented in the Nerja festival. 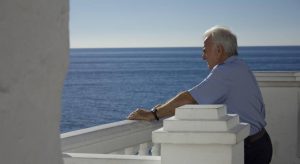 The story of El Mirador did not end here. The film was offered to some other festivals. One day Antti got a call from Monte Carlo and heard that he should pack his dinner jacket. The jury had elected El Mirador to the Monaco International Film Festival. About 800 films were judged and just 20 qualified.

El Mirador did well in this festival. It was awarded for the best cinematography (watch the Mediterranean views of  El Mirador by Calle Carabeo). Also the starring of local actors was convincing.  Antti and his crew send warm thanks to the staff of El Capistrano Playa: Paco, David and Susana and others, who helped them in many ways. You can watch El Mirador from this link:

This entry was posted in Tips.